Family Law, Divorce Mediation
Mediation, a way of dealing with each other. People learn to negotiate. 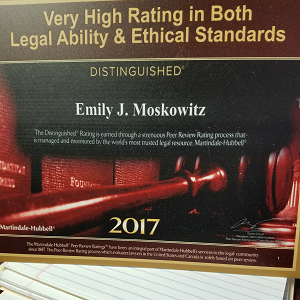 Attorney Moskowitz spent ten years at Neighborhood Legal Services in the north end of Hartford representing battered women and children.   She has spent the last twenty years in private practice, focusing her practice on family law and mediation. Her concern for her clients is exhibited in her approach to the law.   She believes that a divorce should not ruin a family, financially or emotionally. In high conflict cases involving minor children , Attorney Moskowitz has frequently been appointed as the Guardian Ad Litem or Attorney for the Minor Children by the Court.

To the extent possible, Attorney Moskowitz works with the other side in every case to try to come to an amicable settlement with the least amount of stress for all involved.   In cases where that cannot be accomplished, Attorney Moskowitz has the ability to vigorously and successfully advocate her client’s position.

At the Divorce Mediation Center, Attorney Moskowitz assists couples in developing fair and equitable custody and visitation schedules as well as the fair division of marital assets.   She takes on the role of the neutral third party who does not take sides but guides couples to settlements that they consider to be fair and equitable and adequately reflects the needs of their children.   Those agreements are then drafted into Separation Agreements that the couples can bring to Court for an uncontested divorce.

Representation to Protect Your Rights

Q. What do you do that the husband and wife can't do themselves?

A. Apparently I defuse the anger. He'll say something to me, in his usual way of talking to her, which is the reason they're not going to be married anymore. And I will repeat to her what he said in a nonjudgmental way. Then she hears it that way, and says, "Okay." Then she does her response, and he hears it the same way, and I say, "Wait, this is what she said." And suddenly they hear what they're saying very differently. I've taken all the pejoratives out, and put it in very neutral terms. Now we have something to work with. They can't do that at the kitchen table, because if they could do that they would still be married to each other.

Q. Do you ask why they're splitting?

A. I never ask. It's not my business. But I always figure out who's having the affair, or who walked out. It kills me not to ask, there's a part of me that wants to know. If I ask, you know what will happen? He'll tell me his story, she'll tell me her story, then she's defending herself, he's defending himself, they're fighting with each other, and you've thrown it all away. I keep it nonprejudicial. I filter out the stuff that couples do to one another, that makes them crazy.

Q. Do the judges take into account the reason for the split when they divide the assets?

A. It doesn't really matter to the judge what happened in a marriage. In a no-fault divorce, even when it's a little bit contested, the judges want to see each party go on and have a life. They don't want to see someone so down they don't have a chance of coming back. Given that, if they see someone making $5 an hour versus someone making $100,000 a year, they may divide the assets accordingly.

Q. If you're impartial, who do you bill?

A. I encourage them each to pay. Some partners pay 50-50, he writes a check and she writes a check. That way nobody owns me. Very often, though, the funds are family funds, so it's all coming out of the same account. Sometimes they pay two-thirds, one-third. But I don't like anyone to be here without paying for it, so they don't feel the other person owns me.

Q. How do you charge?

A. We bill on a per hour basis, and I don't take a retainer, which is a real advantage over an attorney. An average mediation runs six to 12 hours. I can provide them with an agreement, and teach them how to do a pro se divorce. You can do a mediation under $1,000 if you're good and you're fast.

Q. How can mediation speed up a divorce?

A. Both people are here all the time. It's not as though he talks to her attorney, he talks to his attorney, then the two attorneys talk to each other, then they each have to go back to their clients. Attorneys are busy, and sometimes they put it aside if it's not a big, nasty case. The other thing is, because they're sitting here, it gives it momentum. They get started and they want to get it over with. If they start the mediation, and serve the summons and complaint at the same time, 120 days later they'll be divorced.

Q. Do you ever really dislike one side or the other?

A. What happens in mediation is I love both parties. I can see exactly why they don't want to live with each other anymore, but I never dislike either one of them.

Q. Are you ever accused of being biased because of your sex?

A. Men want to say because I'm a woman I tend to favor women, but I don't. What happens is the women tend to be less powerful. Their issues are children, the men's issues are money. So I'm always fighting with the men for money, and with the women for visitation for the husband. I want to get the money away from him and the kids away from her. But I've had nobody walk out of here saying I was biased against one side.

Q. The financier Ivan Boesky's request for alimony caused a lot of people to realize how much divorce has changed. Is it more common for men to seek alimony these days?

A. It certainly happens, it's possible. The statutes are written so it can go to either spouse. I had a couple way back in the beginning, he had been a househusband, and she had a huge trust. And he was after alimony. I think you still don't see it a lot because by and large women still don't earn what men earn, and if there are children they're at home with the kids.

Q. Have there been any changes in custody of children recently?

A. The trend is to try to keep fathers involved with the kids' lives. Judges are very liberal in visitation, and it's rare you'll see a judge tell a father he can't see his kids. Even in cases of abuse, the judge will work out supervised visitation. The world has come to understand fathers have a place in the children's lives.

Q. Are dads getting custody of the children more often?

A. Dads are getting joint custody, or liberal visitation. The statistic is still maybe 1 or 2 percent of fathers get full custody. Very few men ask for full custody. You still see, by and large, primary custody with the mother.

Q. Are children, even more than assets, the prize in a divorce?

A. The battle is always over kids, and it doesn't even seem like a battle until we start. They'll tell me they have no problem with joint custody, and I'll ask what kind of visitation we're giving dad, and she'll say he can see the kids once a week. Overnight? Oh, no . . . And the battle starts.

Q. Do you get concerned that with things like no-fault divorces and mediated divorces that we're treating marriage too much like a business merger?

A. To some extent a marriage is a business contract. The part that isn't a business contract is the emotional part, but the rest of it is. You come into a marriage with something, and you invest something in it. Unfortunately, still, one person often invests more than another does. You don't get the same back from your investment in a spouse that you would from A. T. & T. Choosing to stay home and take care of kids is a financial investment in a marriage, because it costs between $30,000 and $60,000 a year to replace a wife, according to Chase Manhattan Bank. If she put that money into the bank, if she worked and put that money into the bank, she'd be better off in a lot of cases.

A. These are not short-term marriages breaking up. These are 20- and 30-year marriages. The largest piece of the divorce business these days are people in their 50's, their kids are graduating from college, they can't stand each other, and they're out.

Q. How often does mediation fail?

A. There are a lot of things the judge will never hear when he's making his decision, and the judge can't order some of the things the spouses will agree to in mediation. My attitude towards mediation is not that everyone should be happy, but that we do the best we can given limited resources. Remember, it's this pot that used to support one house now has to support two houses.

Q. What are some of the elements you look for in a settlement?

A. Each of them should have a sense that they can go on and make a life. And there should be a fair division of the assets, and not just how much each side has, but how it was divided. If it's a 401-k pension plan, for instance, I would look for a rollover into another 401-k plan, so there's no penalty for the person having to take it out. Once that's done the other person can take it out and pay the penalty, or leave it there, but that's the spouse's choice.

Q. How does mediation lessen the emotional stress of divorce?

A. Just by the fact that you're in the same room. When you get divorced you go to your lawyer and you're furious. Your lawyer hears the fury and turns it into a whole bunch of motions. One of the great joys of doing mediation is people come in very angry, and they leave friends. Mediation is a whole new way of dealing with each other. People learn to negotiate.

Representation to Achieve Your Goals 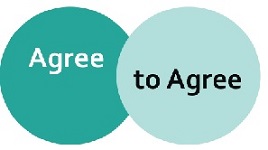 Send us a message, or contact us at the address below 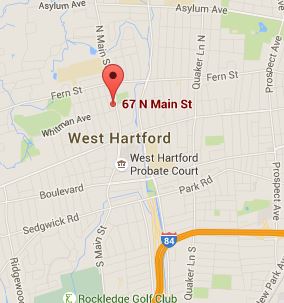